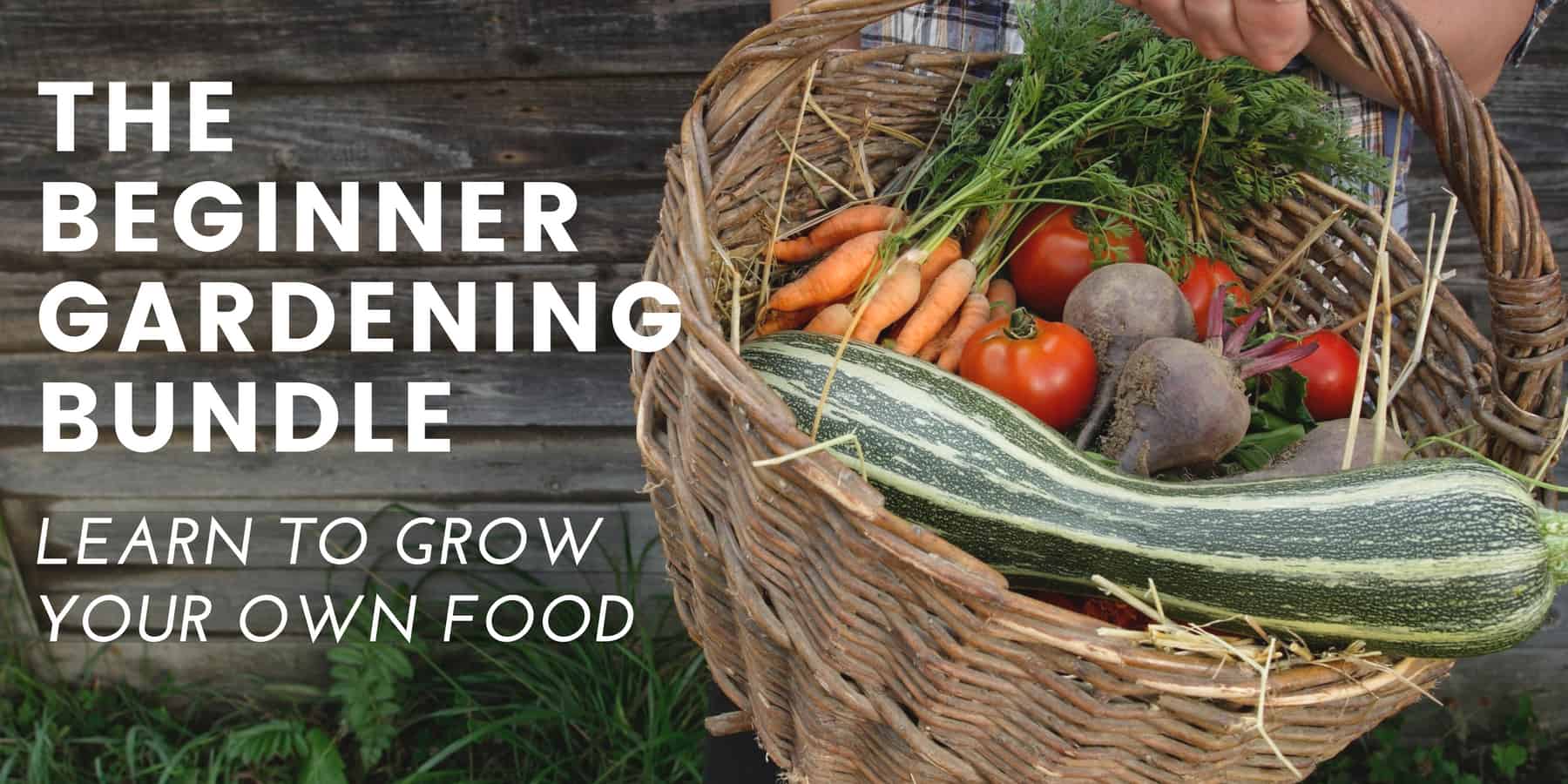 When we sold our produce at market, I loved talking with my customers about our produce. One of the questions that was asked most frequently was whether we sold heirloom or hybrid tomatoes.

It always sparked a conversation about what heirloom tomatoes are and how they are different from other types of tomatoes.

First I just want to be clear that both heirloom and hybrid vegetables can be organically grown.

What are heirloom tomatoes?

The word heirloom suggests that the tomato variety would have been passed down for generations. However, in the world of tomatoes, the term heirloom may be used to refer to any tomato that is open pollinated and breeds true to the parent plant.

There is no general consensus or rule about using the term when selling seeds or tomatoes.

Being a stickler for semantics, I prefer to apply the word heirloom to plants that are truly heirlooms.

Some examples of tomatoes that have been passed down through generations include Cherokee Purple, Aunt Ruby’s German Green, Brandywine Suddeth strain, and Mortgage Lifter. Click the link to Tatiana’s Tomatobase to read the story about where they came from and how they were passed around.

Learn to start your own tomatoes from seed.

Side note: Tatiana’s tomatobase is an excellent and reliable resource for researching tomatoes.

What does open-pollinated mean?

Let’s talk about what it means to be open-pollinated and breeding true. Put simply, it just means that when self-pollinated or crossed with another plant of the same variety saved seed will grow an extremely similar plant.

So if you save seed from open-pollinated crops, you can expect the fruit to be just like the one it was saved from.

The genetic lines of open-pollinated varieties are stable so successive generations are nearly identical to the parent plant.

What about hybrid tomatoes?

A hybrid tomato, however, is one that has been intentionally or accidentally crossed with two different parent varieties to create a new type of tomato in the next generation.

An intentional cross is when the pollen of one variety is intentionally added to the stamen of another variety. This may be done manually by collecting pollen and applying to individual flowers. Individual tomatoes that grow from hand-pollinated flowers are then saved for seed. This is what we do. 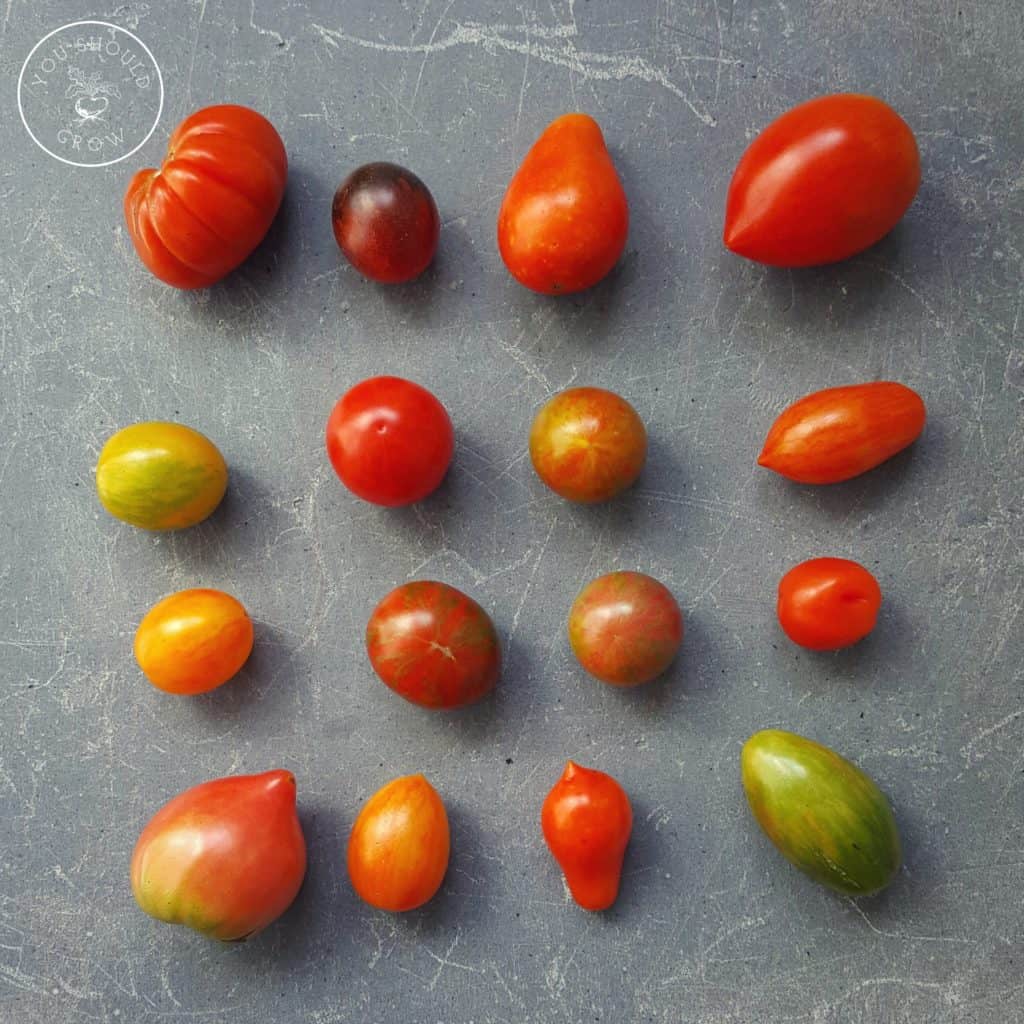 A few of our hybrid tomatoes. Note the different colors, sizes, and shapes.

Large scale commercial operations use a different method. In a controlled environment, lots of pollen is wafted into a room full of blooming plants. All tomatoes are saved for seed and sold F1 seeds.

This would be the case for the famously delicious Sun Gold, Big Beef, and Garden Gem.

Unintentional or accidental crosses happen naturally when wind or pollinators carry pollen from one plant to another. This happens quite frequently, but we might never know if the tomato is eaten rather than used for saving seed.

Because the genetics of these plants are unstable, saved seed from hybrid plants will display considerable variation when grown out. In fact, it takes approximately 7 generations stabilize the genetics of hybrid tomatoes, and the end result can be very different from the first generation.

Many weirdos like us will save seed from hybrid varieties anyway, just to see what comes out. I’ll just say some of our F2 (second generation) SunGolds were, um, not so good. If you choose to grow out hybrid seed, make sure you grow some other varieties as well in case the F2s are inedible.

Are hybrids the same as GMOs?

No. They are not.

GMO stands for genetically modified organism. GMOs are created by altering or adding bits of DNA into a plant cell. In some cases, bits of DNA from other species like a fish or a frog are inserted into the DNA of a food crop.

So why should a gardener care?

If you are a gardener, choosing hybrid vs heirloom tomatoes is solely a personal preference for taste.

At the grocery store, the only way to be absolutely sure the produce you are buying is not genetically modified is to buy organic produce or products labeled non-GMO. Otherwise, you won’t be able to tell by looking at or eating them.

Otherwise, you won’t be able to tell by looking at or eating them. Genetically modified produce has been around much longer than the general public knowledge of it, so if it doesn’t say no-GMO, it is very possible that there’s a genetically modified ingredient.

But you make your own decision and buy with knowledge.

Ready to grow your own food?

I moved this section to the end of this article because it is just my personal opinion of GMOs.

I have strong feelings against GMOS.

But it’s not based on health effects of the produce. I don’t think there’s enough information to prove that eating genetically modified food has any significant effects on the human body. GMOs have been around since the 80s. We’re only just talking about it recently.

My concern with genetically modifying organisms is that their use creates selective pressure in the environment that leads to highly resistant strains of whatever we are trying to suppress.

We cannot control all the side effects that occur in response to the genetic modification, and that makes me very nervous.

I have a saying that I like to use: Nature Always Wins. Always.

No matter what humans do to plants and other living organisms, life always finds a way to persevere. It’s called natural selection, and we should be paying attention to the pattern of resistance that overuse of antibiotics, herbicides, and pesticides has created. 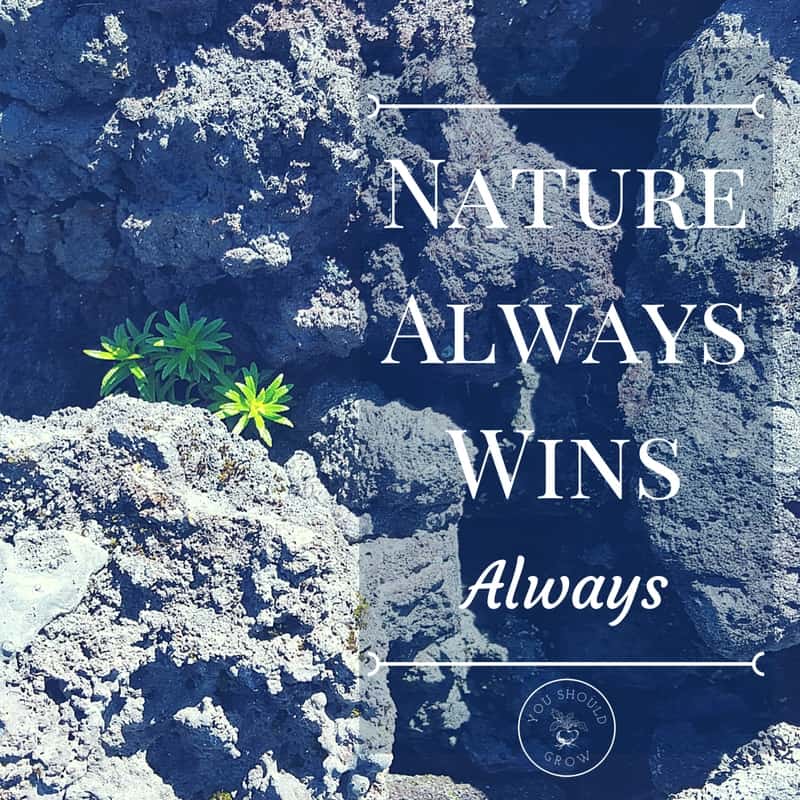 Aside from the huge environmental impact, I boycott GMO as much as possible because I am strongly opposed to the unethical actions of Monsanto company and the poor farming practices that it encourages.

But it’s hard to completely wipe out GMOs and all the companies that support it. I keep trying though. 🙂